PCS FORUM: September 27, 2002 – A Conversation with James Carroll author of The Truth at the Heart of the Lie: How the Catholic Church Lost Its Soul

PCS FORUM: A Conversation with James Carroll  – author of The Truth at the Heart of the Lie: How the Catholic Church Lost Its Soul
FREE
Tuesday, September 27, 2022
7pm EDT 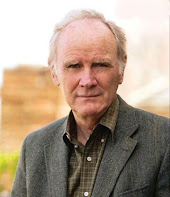 James Carroll weaves together the story of his quest to understand his personal beliefs and his relationship to the Catholic Church with the history of the Church itself. From his first awakening of faith as a boy to his gradual disillusionment as a Catholic, Carroll offers a razor-sharp examination both of himself and of how the Church became an institution that places power and dominance over people through an all-male clergy. 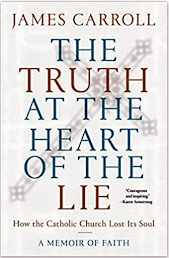 Carroll argues that a male-supremacist clericalism is both the root cause and the ongoing enabler of the sexual abuse crisis. The power structure of clericalism poses an existential threat to the Church and compromises the ability of even a progressive pope like Pope Francis to advance change in an institution accountable only to itself. Carroll traces this dilemma back to the Roman Empire and the Middle Ages, when Scripture, Jesus Christ, and his teachings were reinterpreted as the Church became an empire. In a deeply personal re-examination of self, Carroll grapples with his own feelings of being chosen, his experiences as a priest, and the moments of doubt that made him leave the priesthood and embark on a long personal journey toward renewal – including his tenure as an op-ed columnist at The Boston Globe writing about sexual abuse in the Church.

Ultimately, Carroll calls on the Church and all reform-minded Catholics to revive the culture from within by embracing anti-clerical, anti-misogynist resistance and staying grounded in the spirit of love that is the essential truth at the heart of Christian belief and Christian life.

Please read the book before participating in the forum. James will be focusing on his Epilogue: A Catholic Manifesto.

Many thanks to Ann Harrington, ARCWP, for her recent letter to the editor on the same theme:

For many years I was a faithful reader of Maryknoll magazine and in its pages, I met a dynamic Catholic priest and Navy veteran, Roy Bourgeois.He exuded the love and compassion of Jesus. In 2013 when I learned he was coming to Raleigh, I found myself much like the woman in Jesus’ parable who only wants to touch the hem of Jesus’ garment.

Much to my delight I was asked to be Roy’s driver and take him to Pullen Church where he was going to tell the assembled of his work as a Maryknoll missionary for 40 years, how he became a human right’s activist and how following his conscience led to his excommunication and his dismissal from the priesthood.If you are wondering what his crime was, it was his support of women’s ordination. 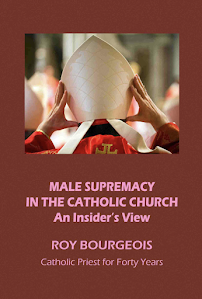 Roy has recently written an excellent memoir, “Male Supremacy in the Catholic Church” that I highly recommend.Roy paid a high price in following the teachings of Jesus.A price he was willing to pay.He is a rare man and I know you will be enriched by reading his story.I agree completely with these words of his: “This crisis in the Catholic Church is not complicated.If the patriarchy that dominates the church is not dismantled and women are not treated as equals, the church will continue to diminish and, eventually die.”

I am an ordained Roman Catholic priest and founding pastor of Free Spirit Inclusive Catholic Community in Greenville.If you would like to be part of the reform of the Church, consider visiting us.All are welcome to participate fully in our services.Email me for more information, all826@suddenlink.net